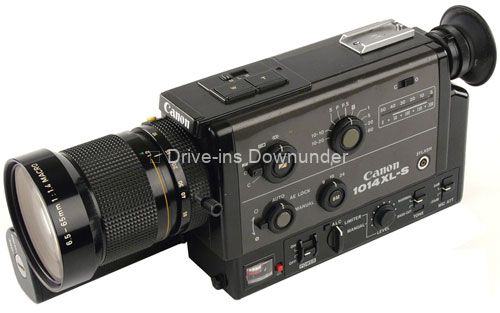 This guide will give you a basic understanding of Super 8 movie cameras and tips on how to select one to best suit your needs from the hundreds offered ebay and other sites.

Super 8 was developed by Kodak and introduced in 1965. It has a 50% larger picture frame than the previous Standard (Regular) 8mm film. The Super 8 system revolutionised the home movie by placing the film in an easy to load plastic cartridge. You simply popped it into the camera without having to thread the film in the dark or flip it over half way through the roll like the old 8mm format.

The plastic cartridge also told the camera, through a series of notches in the body, Whether to switch a filter in behind the lens and what to set the film exposure (ASA) speed to for the particular film type.

Super 8 became very popular and finally made home movies available to almost everyone regardless of income or expertise.

Hundreds of different models of Super 8 camera have been produced since 1965, from very basic affordable models like the Kodak M2 all the way to the professional Beaulieu pro series produced in recent years or the brand new Kodak Super 8 camera. Today on ebay and many other sites you can find high quality cameras with many features at great prices.

What should you look for?

Lenses. A quality lens is perhaps the single most important feature if you want sharp images. I bought a Sankyo 420 XL camera brand new and shot hundreds of feet over many years. It was solid and reliable with good features. Then I purchased a Canon 814XLS and could not believe the improvement in sharpness of my Super 8 images. The Sankyo product did the job it was intended to do, but the Canon is a semi-professional camera and has a high quality lens and metal body.

With a used camera it is very important to ensure the lens is free of fungus or fogging. These problems ruin cameras and can be hard to detect. Long periods of storage without use often leads to this problem. Fungus can look like blotches or even a fern-like pattern on the inside lens elements. Scratched lenses should also be avoided.

Most will offer a zoom lens that enables you to shoot close-ups, medium and long shots without having to move around all the time. An 8x zoom has a greater range than a 3x zoom. A macro lens will enable you to focus on objects very close to the lens like flowers or insects. Without this feature the closest focus range may be around 5ft from the lens.

Batteries. Ensure that the battery compartment is free of corrosion, a battery leak generally spells death for the delicate electronics of most Super 8 cameras. Most use AA batteries for light meter and motor drive. Some older cameras use special button type cells for light meters that are often difficult to find now, make sure they are still available. There are also models that use rechargeable cells, unless you wish to spend money on a new cell or an outboard pack, these should be left for the pros. This old rechargeable battery technology from the 1970’s is nothing like your mobile phone battery of today!

General features: Most Super 8 cameras have an inbuilt light meter, this will tell you if you have enough light to shoot in. All will be able to shoot at 18 frames per second, some offer 24, 25, 36, single frame and other speeds. If you want to do animation, or shoot slow motion, then single frame and variable speed options will be handy. A back-light control enables you to open the shutter an extra stop or so to make subjects be seen when there is strong light behind them. An XL shutter enables shooting in lower light situations. It alters the angle of the shutter blades to allow more light to hit the film. Most cameras from the late 1970’s onward have this feature.

Sound: Sound Super 8 cartridges are no longer mass produced so buying a camera with sound recording ability maybe redundant, however sound cameras generally were of a higher specification and had many features included as standard over their silent cousins.

ASA range. This has become a less important aspect to Super 8 film-makers since Kodak 64T was discontinued in 2010. About half of the Super 8 cameras produced did not automatically recognise the 64 speed of this film. They required manual correction via the EE lock feature on some cameras or the fully manual control on some high end cameras. Today’s Kodak reversal 100D film is automatically recognised by most popular cameras.

Reversal film like Kodak 100D is film that is sent for processing after being exposed in the camera and the same actual film is then returned to you for projection. Negative film is just that, a negative that requires either printing to produce a positive print, or more commonly scanned digitally for editing and finally put out in a digital or electronic format. For the hobbyist and those new to Super 8, stick to reversal films.

The new Super 8 film called 100D. This is a daylight balanced stock and whilst the 100 ASA speed is recognised by many cameras via the notch on the cartridge, you will need to make sure you disengage the filter in your camera by moving the filter switch to the bulb symbol position (not the sun symbol) or Tungsten position. This will remove the inbuilt filter in your camera and expose this new 100D film correctly.

What do I recommend? Well you can’t go past now affordable top line cameras with great lenses and features. The Canon 518, 814 and 1014 range are the best value quality cameras around. They have proven reliable and produce top quality results with excellent lenses and features. Beaulieu are excellent, but watch for spent rechargeable batteries on some models. Nizo, Bolex and Nikon also offer excellent cameras, but they are not as common as Canon and Beaulieu.

Regardless of the brand, ensure that it operates – (some have been recently tested with film), that it is clean cosmetically, (looks cared for) and offers the features you want. You may take a risk on a seller that knows nothing about the camera, but it is better to seek out those that have actually used the camera or understand Super 8 cameras.  I once traded and re-sold tested and cleaned cameras myself for may years. I found Canon cameras stood the test of time well if cared for, particularly those made after the 1974 updates to their range.https://global.canon/en/c-museum/year_search.html?t=camera&s=cine

Many companies offer Super 8 film cartridges (raw stock) including Dwaynes Photo, Spectra Cine, Pro8mm and Nanolab. You can also buy them from many other omline dealers. There are labs that can process the film all over the world. https://nanolab.com.au/index.htm

Remember, do research, ask questions and enjoy the world of Super 8 film-making. There is nothing like shooting film if you have only known video. It is what many of the worlds feature films and quality TV shows are produced on. Some of the worlds greatest directors including Steven Spielberg and Peter Jackson started with Super 8, you can too.