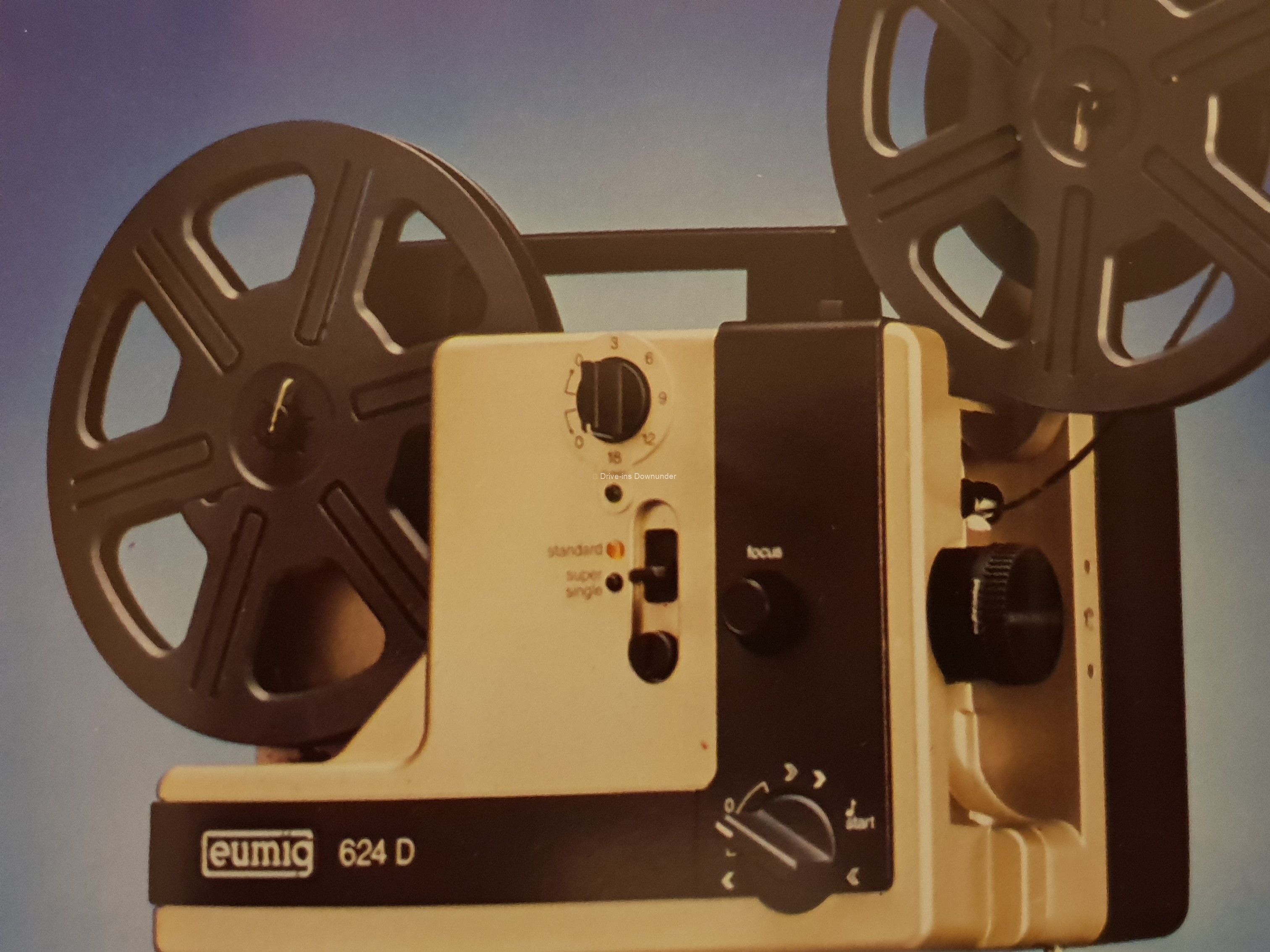 This guide will spell out in simple terms a brief history and tips for buying a Super 8 movie projector.

The Super 8 film format was introduced in 1965 and pushed amateur film making into the bigtime. The Super 8 format was all about high quality, affordable film images for the average family without all the tricky loading and threading relied upon by other amateur gauges like Standard (regular) 8mm, 16mm and 9.5mm. The Super 8 format used film 8mm wide like Standard (Regular) 8, but it had a much larger area devoted to actual film frame image and less area given to the sprocket holes, it therefore required completely new cameras and projectors compared to the old Standard or regular 8 format.

The Super 8 cameras used a simple cartridge loading system that also set the film exposure speed (ASA) in the camera; projectors appeared that offered full automatic threading and many other innovations. By the early 1970’s Super 8 sound projectors and cameras began to appear and this caught on in a big way.

Home movies began to boom and in many countries with a solid middle class income it was rare that at least somebody in your family did not shoot their own films on Super 8. Kids’ birthdays at home, tourist attractions, sunny days in the backyard and any public event you could think of were shot with the Super 8 camera. The vivid color of Kodachrome and new brighter projection lamps brought these images to life on the lounge room wall like never before. You can still shoot the family on film or learn how to be the next Spielberg by purchasing Super 8 film today, Kodak now offer an excellent range of Super 8 film products for the first timer, to the stuff the latest rock videos are captured on and shot by pros. There are also other brands available at specialist dealers; simply search Super 8 film and you’ll find some. https://www.kodak.com/vn/en/Consumer/Products/Super8/Super-8-film/default.htm

Packaged movies (cartoons, shorts, features) had always been available to the home projectionist, but before Super 8 most were black & white and lacked a soundtrack. By the mid-1970’s you were no longer restricted to silent Chaplins or Laurel and Hardy’s; classic cartoons, travelogues and even digest versions of all that Hollywood had to offer was available. Star Wars, Grease, Singing In The Rain and hundreds of other features were expertly edited down to 20 minute versions for the home. So, even if you didn’t choose to shoot your own movies, a Super 8 projector gave hours of enjoyment in the home. You can choose from thousands of used package titles ebay, Facebook marketplace, Craigslist etc in the Super 8 film category or even buy them brand new from various dealers like Classic Home Cinema and Reel Images. https://www.ebay.com/sch/i.html?_from=R40&_trksid=m570.l1313&_nkw=film+stock&_sacat=0

OK, so now you’re interested in getting into Super 8 and want to buy a projector. The following is information does vary, especially with the brands available in your part of the world and also depending on what level of knowledge you have. I’ve been collecting film and operating projection equipment for over 40 years so have learnt the hard way.

The major manufacturers ceased production of Super 8 projectors in the mid 1980’s, so you are looking to buy a complicated piece of photographic/electronic/mechanical equipment that is around 30+ years old. Take the following steps into account and you should end up with a solid projector that will suit your needs.

Super 8 projectors are divided into two main categories, silent and sound. The first Super 8 projectors that appeared in the latter half of the 1960’s were silent (they could not reproduce sound), but were mostly dual gauge. This meant they had the ability to run both Super 8 and the old Standard (Regular) 8 mm films. This was very handy as almost everyone that bought a Super 8 projector at this time had Standard 8 films they still wanted to view. In fact even today you would be surprised how much Standard (regular) 8 film there is around.

In the early 1970’s sound projectors appeared. They generally cost more to buy, but in addition to having a magnetic sound head, they offered more features. Most however could only run Super 8 films.

What features do you need? Bright lamps are very important. Most Super 8 projectors will have a modern style QI type lamp. Whilst many solid projectors offer 50 watt lamps, 100 watts is always better. A 100 watt lamp will provide adequate illumination on a matte white screen 4ft – 8ft  (2m) wide in a dark room, a projector with a 50 watt lamp will struggle at this size. Some top line projectors offer 150 or even 200 watt lamps for even larger images. Remember it is the size of the image, not the distance from the projector (throw) that determines your screen brightness. Read this again as it is something that even experienced people get wrong!

A zoom lens is handy, as it can make the projected image larger or smaller without having to move the projector. Almost all Super 8 projectors come with a zoom lens. Most projectors will accept a 400 ft reel, some however offer 600, 800 or even 1200 ft reel capacity. Some packaged films and home movies may be on reels larger than 400 ft. Auto-threading from the feed guide to the take-up spool is also common on Super 8 projectors.

Lower end sound projectors can have poor sound reproduction and low powered amplifiers; commonly 5 watts or less. Look for 10w, 15w or more if you plan on filling a room with quality sound. Many offer sound on sound recording facilities, where you can add a commentary or back ground music to a blank track or previously recorded sound. Stereo playback is available on high end projectors and you can buy Super 8 stereo sound films.

Can I copy my films to video/dvd? A variable speed control will generally be required to copy films to video. This control will allow you to slow down or speed up the fps (frames per second) in order to eliminate the black frame lines and flicker from the recorded video image. Beware, some silent projectors have a limited speed range that may not be suitable to copy your films. Some sound projectors also do not have the range required to copy sound or silent films correctly. Ironically, some that only offer 18 or 24 fps can sometimes copy films well. This is because original factory settings in the projector have changed over time and the unit may now operate at a speed that allows films to be copied with a quality image. In any even there will always be someone not far from you that can copy films professionally and load them onto disc, USB or other formats for you.

What is a good brand of projector? This question is a tough one as dozens of companies produced Super 8 projectors. Some offered over 20 models alone from bargain basement economy units to those that could run film to 100’s of people in an auditorium. Some of the major brands are Elmo, Bell & Howell, Chinon, Hanimex, Bauer, Titan, Eumig, Noris, Kodak, Keystone, GAF and Sankyo. Other than Kodak, many people would be unfamiliar with these brands of projectors. With Super 8 cameras there are instantly recognizable premium brands like Canon, but in projectors a little more research is required to approach a purchase with confidence.

Of the brands listed above certainly Elmo and Eumig models have stood up well over the years with few major faults. They are constructed solidly and owned by even the most astute Super 8 hobbyists. They produced high quality sound and silent projectors with good lenses and many features. If in Europe you may also consider Bauer and Noris that are both excellent and more common there. Importantly these brands are gentle on film through the film path and don’t have dirt traps that can lead to scratched film.

The two most common problems found in Super 8 projectors that may be for sale are blown lamps and broken belts. Replacements for both can be found with a search, but it is easier to buy a projector that is already working.

Spare lamps can be found for most major brands although some are becoming scarce, particularly for rare models and some built in the 1960’s. Lamps are generally described by a three letter code eg EJL. You can search on line with many companies and find out if the lamp for your projector is still available and at what cost. Spare drive belts for most projectors can be bought online (ebay) and you could also try buying a replacement from any belt or “O” ring supplier store near you, but just make sure you have the old belt to show them!

Extra buying tips: Always try to buy a projector that has its instructions; even better if it has its original box and accessories. Make sure it works! If the seller can tell you it has been tested with film, or better still you can see it operating in a picture, you are ahead of the pack. If the seller can’t tell you if it works or not, or is unprepared to test it, don’t bid unless you want a shelf ornament or are prepared to troubleshoot it and buy repair it. Bargains can be had, but remember these units are often 40 years old and have been sitting unused for maybe 20 years, so ask questions. Look for solid feedback too.

The web offers a large amount of info. on all types of projectors so do some research. You can find a model with the features that suit you by reading the features offered in the description. If the detail is light on, then ask the seller, as the projector features were printed in the instruction booklet or on the box it came in. A projector that looks clean and is cosmetically tidy is generally better than one that looks messy and not cared for. Make sure all the original parts come with it; if it is a dual projector are the gate and sprockets included to run both Std and Super 8? Does the projector come with a take-up reel? Is the power cord included?

A seller with a money back return policy is good as it means they have confidence in the projector. There are many untested projectors for sale and you may wish to take a chance, but do you know an affordable Super 8 projector repair shop near you with parts? No, then make sure you buy a good unit that actually works.

What do I use? I have owned over 100 projectors (crazy i know), but my first Super 8 projector was a Sankyo Sound 501 bought brand new (thanks Santa!) in 1979. It had good features and was a middle of the line projector. It served its purpose well but gradually wore out. It developed speed issues and the plastic lens collar wore out so the focus would not hold in place. I still have it however.

I graduated to an Elmo ST 1200 and now own several different models of this projector. Having owned so many different projectors, I have seen that many, even basic models, can suit their purpose well. Today my projector of choice is the Elmo GS 1200 Stereo, but it is more than what most people will need (or are prepared to pay). The top line Eumig S938 Stereo is also excellent.

This brief guide should give you a head-start into (or back into) the world of Super 8 projectors with a solid reliable projector. Grab some film, set it up and escape into that wonderful world of  film projected on your own big screen.

Be sure to check back soon when I add more guides on Super 8 cameras, 16mm and more.